On June 5,2012 Venus passed across the face of the Sun for only the second time this century and the last time until December 11,2117 (105 years!). When Venus lines up between the Earth and the Sun, its as close as it ever comes - about 27 milion miles away. It appears over 58 arc-seconds wide (a little less than 1/30 the width of the Moon or Sun in the sky). 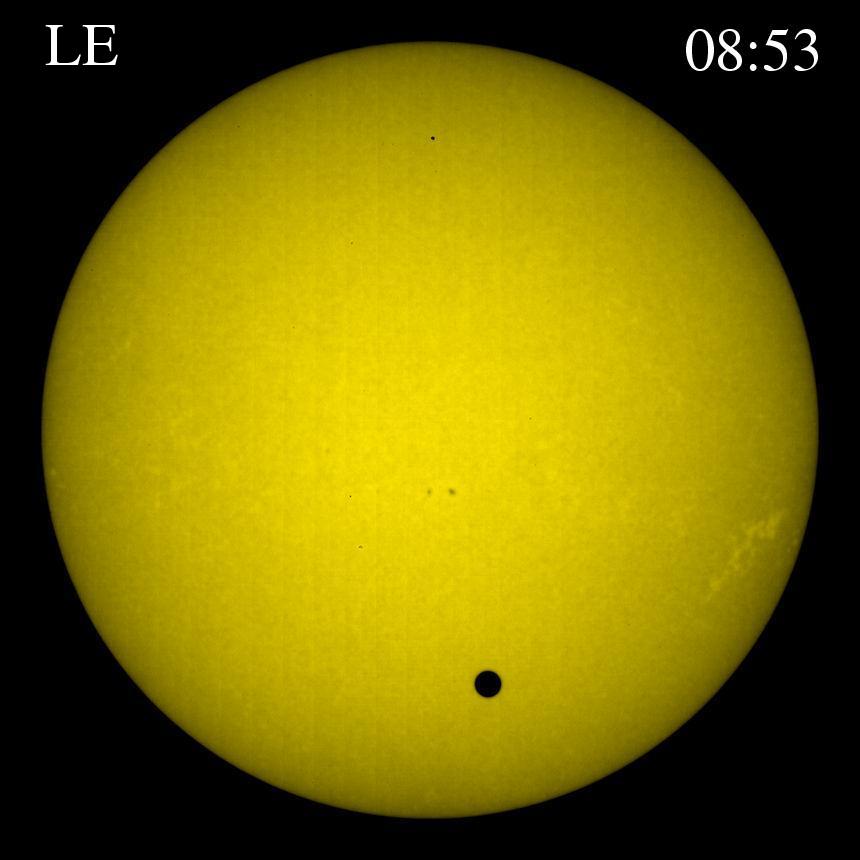 Johannas Kepler predicted the first Venus transit in 1627 would occur in 1631. Kepler's laws of planetary motion explained the relationship of the various orbits, not a true measure. If the Earth-Sun distance could be accurately measured, then the true size of the solar system could be understood. Unfortunately, the 1631 event occurred below the horizon in Europe and went unnoticed. Jeremiah Horrocks and William Crabtree of England produced the first estimate of 95 million kilometers (59.4 million miles)using the transit in 1639. By the 1700's, Edmond Halley (of Halley's Comet fame) laid out the techniques and observations needed to better measure the distance to the Sun using the transit of Venus. Expeditions were mounted in the late 1700's by various teams, including Charles Mason and Jeremiah Dixon (also known for the Mason-Dixon line!). The results were marginal due to the "black-drop effect" as the silhouette of Venus neared the limb of the Sun. Measurements in the 1760's indicated a range of distances from 76 to 96 million miles. The transits of 1874 and 1882 did little to improve the measurement. The Earth's atmosphere and telescope imperfections made the "seeing" fuzzy at the critical contact points. At the start of the 20th century astronomers instead used the near-Earth asteriod Eros 433 to determine the astronomical unit.

The image below illustrates the Venus egress "contact point" taken by an AAG member in 2004 from Florida. By precisely timing the event from widely separated locations, early astronomers thought they could compute the distance from the Earth to the Sun using trigonometry. However, the measurement was much more difficult to make due to the black drop effect. This optical phenomenon appears to connect Venus' disk to the limb of the Sun (see 2nd image from left) and complicated the precise timing of the event. This image was taken using a Nikon D100 DSLR through a Takahashi FS 102 telescope/Baader solar filter using a Takhashi EM1 mount.

While Venus passes in front of the Earth about every 584 days, the orbit of Venus is inclined ( by about 3.4 degrees) relative to the Earth. Most of the time Venus passes above or below the Sun as viewed from Earth during this conjunctions. 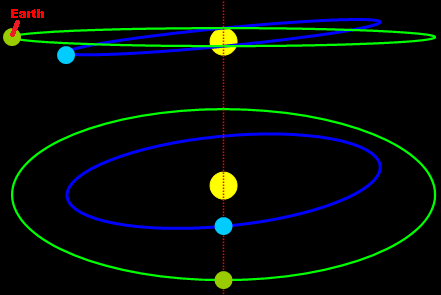 While a transit of Venus no longer holds a scientific value, it is a rare and stunning event. Oliver Lee State Park, The New Mexico Museum of Space History and the Amateur Astronomers Group had specially-filtered telescopes and glasses available for the public for free to view this "once in a lifetime event". Venus Looked like a black dot silhouetted against the Sun's brilliant disk.

Many thanks to the SDO mission for providing the AAG with our solar glasses for the May 20th annular eclipse and Venus transit events !

Scientists are currently using a 'transit method' to detect planets around distant stars. When the alignment of a distant star system and Earth is nearly edge-on, scientists can detect and measure the dip as a planet blocks a fraction of the starlight. Learn more about the detection of extra-solar planets at the Kepler Space Telescope website.